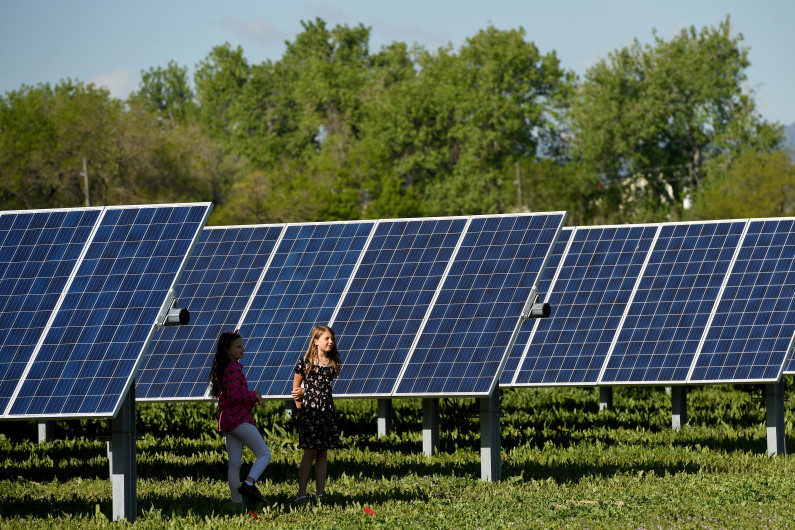 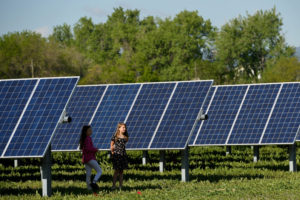 ARVADA, CO – MAY 30: Cezanne Kumpe 9, daughter of Corrina Kumpe General council and director of legislative affairs for SunShare and Mari Priola 8, daughter of Sen Kevin Priola walk among the solar panels at the JeffCo Community Solar Garden in Arvada, Colorado waiting for Governor Jared Polis who will be signing several energy bills May 30, 2019. (Photo by Joe Amon/The Denver Post)

According to this article from The Denver Post,  solar installations in Colorado increased 19 percent in the first three months of this year, which a report released Tuesday says maintains the Centennial State’s No.12 ranking among states with the most solar projects.

The new “U.S. Solar Market Insight Report” said Colorado added 39 megawatts of solar power through the first quarter of this year, up 19 percent from the same period a year ago. The state has a total of 1,227 megawatts installed, compared to 544 megawatts at the end of 2015, according to the Solar Energy Industries Association, a national trade group.

One megawatt provides enough electricity for about 200 homes.

Colorado has 6,847 solar jobs, the eighth-largest workforce among states, according to the report by SEIA and Wood Mackenzie Power & Renewables, a research and analytics firm.

Mike Kruger, president and CEO of the Colorado Solar and Storage Association, said bills passed this year by Colorado lawmakers “put the state on an upward trajectory” when it comes to the use of renewable energy.

“Changes to the way utilities across the state plan for their electric generation, improvements to the community solar program and (Public Utilities Commission) investigations into a more competitive wholesale market and innovations to the utility business model mean that Colorado will probably add a gigawatt or more of renewable energy each year throughout the 2020s,” Kruger said in an email.

In 2018, renewable energy sources produced about 17 percent of the nation’s electricity, according to the U.S. Energy Information Administration. Solar power accounted for about 2 percent of that.

Natural gas was the largest source of the country’s electricity, producing about 35 percent. Coal accounted for about 27 percent and nuclear energy produced 19 percent.

Read the rest of this article on The Denver Post